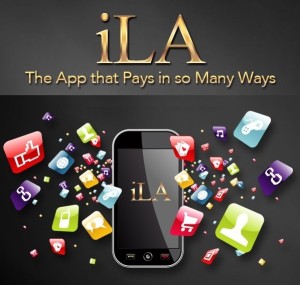 The Inspired Living Application or ILA is currently in pre-pre-launch (as of 19th January 2013) It is set to hit the market in pre-launch on 1st February 2013. There is a lot of viral buzz going around about this app at the moment as it is the first of its kind.

On this page I will be taking you through what the app is and how it works. How you can make money from it and why it is so unique.ILA was designed for people interested in personal development.

It is designed by  the company Savage Apps . The CEO of Savage Apps is John Marr (who is also a graphic artist and musician), the company has some 50 apps on the market in a variety of niches with over 2.5 million downloads worldwide to date and solid relationships with top-tier companies like Warner Brothers Records and Apple.

Based on a monthly subscription, iLA will deliver a weekly, highly-professional video to your iPhone or other mobile device on a variety of personal and business development topics from some of the top leaders in their respective areas of knowledge. The videos will be limited to around 8 mins.

Not Just for Smart Phone Users

One great thing about ILA is that it is not just for smart phone users, as it states on their website “Even if you don’t have a mobile device you can still enjoy iLA from a traditional website and be encouraged to reach for new levels of excellence in your life.”

The Money Making/Marketing side of ILA

This is the part of ILA that really made me look seriously into it. As a Network Marketer myself, when I looked into the way that Savage Apps have set up the forced matrix compensation plan it blew my mind. This is what makes it the first of its kind, and why it is going viral and blowing up in such a big way.

HOLD ON! I have no interest in promoting or marketing anything!

Who said anything about having to market something?

If you are interested in any of the following:

ILA was designed specifically for you with three subscription levels, that meet anybody's needs:

So, if you have no interest in telling other people about this great app and just want to keep it to yourself, go ahead and simply sign up as either a Free Subscriber (remember, once those videos are taken down, they’re gone forever) or as a Retail Customer at $6.95 per month with full access to the iLA archives.

At some point you’re probably going to share one of your weekly or archived videos with somebody, and they’ll want to know where you got it and how they can get hold of it too. Like when you tell your friend about the great meal you had at a restaurant. The big difference is, restaurants never pay anybody but ad agencies for spreading the word about them.  In this case, an active ILA Associate will receive a portion of the commissions from that person’s subscription.

How can that be fair! I recommended them!

Okay, then add just another $3.00 to your personal development budget and enroll as an Associate.  You’re not committing yourself to anything or taking some huge risk.  The fact is, there IS no risk at all, considering ILA offers a 30 day refund to retail customers and associates.

Even if you’re not at all interested in nor have any intention of marketing or promoting ILA, as a $9.95/month subscriber, you’ll still be automatically placed in the matrix, and — simply because of how a Forced Matrix works — the company’s software will be placing new associates somewhere in the matrix, and that could very well be right under you, starting your own personal 3×7 matrix.  As a result, you’ll receive a portion of the commissions from that Associate’s monthly subscription, even though you never even met, talked to or recruited them!  Extra money in your pocket for doing nothing!

Now this could all happen a lot quicker if you decide to be a little more pro-active and start actually telling people about this thing, which you’re probably going to do anyway! just like you do for restaurants, movies, shops.

Mmmm Maybe I could do a bit of Marketing/Promotion thing....

Ok then, let me explain how the compensation plan works, you can watch the video below, or I will try my best to outline it below that.

Lets clear this up right here and now, being involved in Network Marketing myself I lose count the amount of times I have heard this.

In a Pyramid scheme you hand over money as an "investment" to the person above you in the scheme, usually with the promise of a high return on that "investment", and normally you do this for no product or service in return. The money flows upward, and because the scheme is built on pretty shaky (and usually illegal) grounds, you may get that high return for a little while, but eventually the organizers will get caught and the whole thing will fall apart. Pyramids are not sustainable because the number of people you need to get involved becomes more than are on the earth pretty quickly.

Network or affiliate marketing, on the other hand, is and always has been a perfectly legitimate sales and marketing plan. A company has a product or service to sell, but rather than paying a hired sales team or marketing agency, it simply shares the profits from sales with independent distributors or associates — you — for helping to spread the word about that product or service. Commissions flow downward through the independent sales force based on a specific formula.  As long as there is a product or service and you’re somehow involved in the marketing or promotional efforts, you get paid.

Ok get me enrolled, it sounds good

So you decide to enroll as an associate, but your still not sure you will do anything with the marketing side of it and just want to enjoy and learn from the weekly videos you will receive......

That is fine! Even as a passive participant in the matrix, eventually there’s a chance that your matrix will begin filling up, simply because of the way the matrix software works.  It may take awhile, but hey, you’re not doing anything anyway.  Once there are 12 people in your matrix, your subscription is free.  You will no longer pay a penny for your monthly videos. As time goes on, there’s even a chance that your matrix may even fill up all the way down to the 7th level, at which point (whether or not you recruited or subscribed anyone) you  will have just over 3,000 people in your organization and a little over $2,500 in extra monthly income.  Not earth shattering, but nothing to sneeze at, either, especially since you may or may not have done anything to deserve it.

If you directly refer 3 people who enroll as Associates, you’ll receive a 10% bonus match of their matrix commissions, which is $251.17 for each person with a filled matrix.  That’s an extra $753.51 per month in your pocket. In today's financial climate that's a serious amount of extra cash, for not doing a lot, and could make a serious dent in your mortgage/rent payments or payment towards debts.

Directly refer 6 people who enroll as Associates.  You’ll receive a 20% bonus match of their matrix commissions, which is $502.75 for each person with a filled matrix.  That’s now an extra $3,016.50 per month in your bank account.

So you've enrolled six people.  How  difficult is it to enroll just four more?  That’s 10 people you've enrolled as Associates.  Now ILA is going to pay you a whopping 40% bonus match of their matrix commissions, which is $1,004.70 for each person with a filled matrix.  That’s an extra $10,047.00 per month in your bank account!

As I said before, the only requirement to participate in the matrix program is to simply enroll as an Associate for just $9.95 a month.  Remember, that $9.95 goes away once there are 12 people in your matrix.

So when will ILA go live?

Pre-Launch begins on February 1, you won’t be billed until then, but you’ll be securing your place in the matrix system.

The pre-launch is expected to run for 60 days, during which time all systems will be tested to ensure that everything is running smoothly and any little glitches worked out.  This is standard practice in the app world.  The first commissions are scheduled to go out on April 1, 2013.

How do get started with this?

Visit the ILA Website and go to the "Join Now" part of the page and enroll. If you enroll before February 1, you will not be billed until February 1, even though the form will ask you to enter your payment information.

By enrolling today, you will be taking the first step to be involved in something which is going to be massive. In just the first 8 days of pre-enrollment, which began in early January 2013, ILA received nearly 13,000 enrollments!  That’s unheard of and is a sign that this will go viral extremely quickly once the app is actually available and the videos are being delivered.